Commercial real estate market in Kazakhstan: growth and trends in 2022 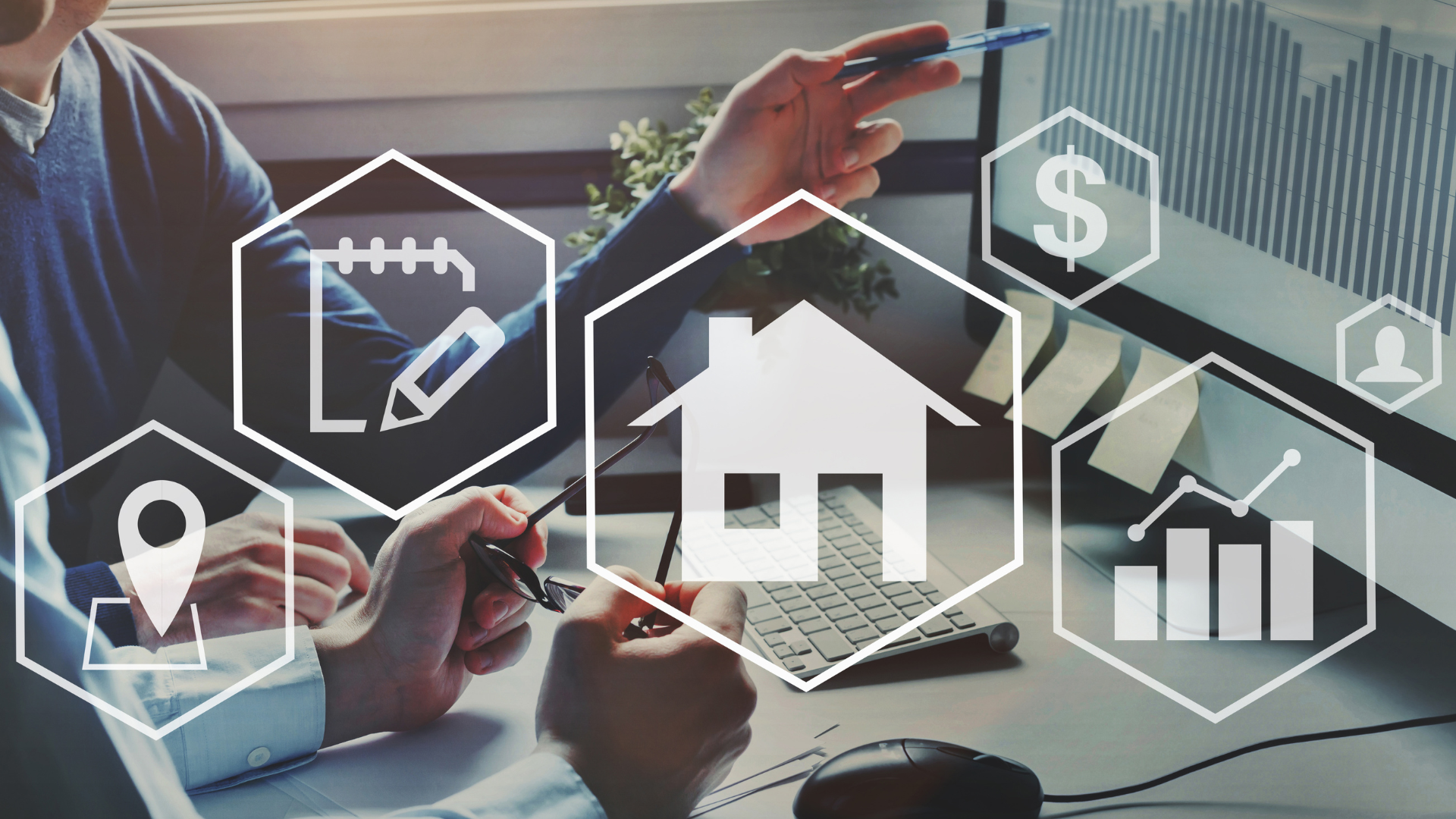 In 2020, many real estate market experts predicted significant changes in the office real estate market due to the closure of malls during the “lockdown” regime. However, there are 60 commercial real estate objects in Kazakhstan, of which 35 are Business Centers, that is, 58.3% of the total, 25 are Shopping Centers and Shopping and Entertainment Centers, or 41.7% of the total. The city of Almaty accounts for 32 objects, or 53.3%, for the city of Astana – 26, or 43.3%. The total commercial area of the objects we accounted for was 1.20 million square meters. m, which is 3.5% more than last year – 1.16 million sq.m.

Retail real estate is gaining momentum after the pandemic and bouncing back before the covid period, the trend of online sales has strengthened with an increase of 70% in 2021 compared to the pre-covid period.

It should be noted that the ideal new concept of shopping centres and malls is based on the needs and financial abilities of residents. It is the portrait of the buyer that determines the price segment and the choice of brands.

The target group of visitors to the malls in general and malls of Almaty will be directed to generation Z (born 1997-2012), as the profitability of generation X and Y will begin to gradually fall in the next 10 years. Consequently, the income of generation Z will grow significantly, and it is them who will become the main source of demand for shopping centres and will account for more than 60% of buyers in malls and shopping centres.

The popularity of the concept of offices in the format of coworking is gaining high demand, as the pandemic has clearly demonstrated the possibility of effective work regardless of the location of the office workers. In regards to this fact, number of employers are saving on office space rents and as well as utility bills by switching to a more flexible regime, giving the employee the right to choose. From the employees’ side, given way of work is more convenient as transport costs and time, previously spent on traffic jams, on and off the work had decreased. Overall, it can be concluded that this type of workplace practice is gaining momentum.  This factor significantly influences more flexible offers for rent payment.

It can be concluded that during this period, the office real estate market is undergoing a transformation under the influence of the pandemic, which has led to significant changes in the terms of office space rental services.

At the end of 2021, the office real estate market was expecting a recovery after the pandemic. However, the year 2022 started tragically, due to the January events, which caused significant damage to commercial facilities and administrative buildings. In general, the real estate market of the city of Almaty has undergone significant changes compared to the city of Astana, and at the moment, there are ongoing works to repair and restore the damaged and looted buildings during January events are taking place.

In the capital, mainly state and national companies are located, in Almaty there are more tenants in the field of small and medium-sized businesses.

At the beginning of the year, in the period until March of this year, before the activation of hostilities between the Russian Federation and Ukraine, Baker Tilly analysts assumed that the situation after the pandemic would change for the better. However, due to the transition of many tenants to the “online” format, the leased office space has been significantly reduced by 15–50% since 2020. Until the end of the first quarter of 2022, there was a slight decrease in occupancy in the business center, as management companies revised rental rates, which will not allow a significant increase in vacant space. The “remote work” trend, which has continued to this day and is associated with a low number of jobs in foreign companies, has increased the demand for mini-offices, namely the new “coworking” product. At the end of the 2nd quarter of 2022, the occupancy of the “co-working” was 100%. Large companies left their employees in free visiting mode.

In the city of Astana, the total area of office buildings amounted to 1.60 million square meters, most of the business centre is located on the Left Bank of the city – 1.09 million sq.m. (74 buildings). According to the analytical data of Baker Tilly, the following trend is observed by class: class A and A+ office premises – 8%; class B+ office premises – 23%; class B office premises – 40%; Class C office space – 30%. (arenda.kz)

С the commissioning of the tallest building in Central Asia, Abu Dhabi Plaza, will increase the area of class A + office space by 127 thousand square meters. meters.

As for the city of Almaty, with the presence of the “Program for the development of the city of Almaty until 2025 and medium-term prospects until 2023”, which provides not only an increase in the population, but also the quality of life, through the development of the city’s infrastructure. Based on the results of the analysis of the mentioned above program, we also predict an increase in the number of commercial and office space. The program proposes the development of the lower part of the city, the experience of Great Britain is taken, where an underdeveloped area of the city of London is served as an example, with the subsequent implementation of development plans and attracting investments, followed by the allocation of large IT companies in this area. However, there is a risk of an increase in real estate prices in general due to a shortage in the construction of materials and equipment, since most of what is supplied from Russia is under an export ban. Similar dynamics is presented in foreign high-quality equipment and materials, which creates a more uncertain situation regarding the timing of the implementation of new facilities.

One of the favorable factors in the development of supply and demand for commercial spaces is the relocation of the population and part of the businesses of the Russian Federation to Kazakhstan. The influx of foreign employees has a positive effect on the occupancy of business centers. Following the growth of business activity and the increasing demand for commercial real estate from international and large companies, there is a need for quality offices. In the first and second quarters of 2022, IT companies and companies in the financial sector showed the main activity in the market. Increased demand from high-quality office spaces from such companies makes it possible to raise rental rates. Also, a particularly influencing factor in the development of commercial real estate is “the residence permit program” which provides an opportunity for opening your own business, employment in companies of Kazakhstan and investment opportunities. Of particular importance in the implementation of the investment goal is the work of the AIFC in reducing the time for obtaining a residence permit for immigrants, which entails an increase in jobs in this segment and, accordingly, an increase in office spaces. 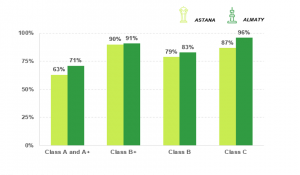 According to market research conducted by analysts at Baker Tilly, based on preliminary results for the 2nd quarter of 2022, rental rates per 1 sq. meters in the cities of Astana and Almaty, remained at the same level which was quite stable, however, there was an increase in the cost of servicing the business center by 15-20%. This particular trend is mainly is associated with an increase in the exchange rate, which affects all goods (household chemicals, paper products, equipment, building materials and office furniture). Despite the positive dynamics of the exchange rate, landlords are in no hurry to raise rental rates, as there is a risk of a decrease in the occupancy of leasable areas by domestic tenants. Thus, the occupancy at the end of the 2nd quarter of 2022 of class A and A + office premises in Almaty varies between 80-90% with a slight increase compared to 2021, when occupancy was in the range of 73 up to 83%. A similar situation can be seen in the B class sector, which is one of the most demanded in the office real estate segment due to the preference of small and medium-sized businesses for a low rental rate, in contrast to the A class rates, and more comfortable conditions, in contrast to the class C.

In the city of Astana, the occupancy of Class A and Class B offices is 63% and 79% respectively. By the end of 2022, it is planned to bring several more business centres to the market (such as Abu Dhabi Plaza, Sat Tower), which can adjust rental rates and affect the occupancy of office real estate, so that most participants in this market segment are waiting. According to the Bureau of National Statistics of the Agency for Strategic Planning and Reforms of the Republic of Kazakhstan in September 2022, the number of operating small businesses increased by 18.1% compared to the corresponding date of the previous year, and in the cities of Astana and Almaty by 11% and 17%, respectively, according to comparison between the same month of the previous year. It should be assumed that based on the growth of registered legal entities in the cities of Astana and Almaty, the commercial real estate market is expected to grow, subject to an increase in jobs and aggressive adaptation of Russian companies in the Kazakhstan market. Given dynamics will only be evident by the end of 2022, so we are only making assumptions.